A couple of budding young hospitality entrepreneurs are hoping to make a mark on the industry nationally with three Queenstown bars under their belts in just three years, and Wellington and Wanaka are now in their sights.

“We’ve got a huge vision and drive. We want to be a leading hospitality company in New Zealand and we’ve got the support in place,” Whalley says. “We’d like to be the All Blacks of hospitality.”

Their latest new aprés ski bar Rhino’s Ski Shack is a first for Queenstown and they’ve since been negotiating to buy a large bar and restaurant in Wellington. They’re also on the look-out for opportunities in Wanaka.

Whalley, who has eight years’ experience in the UK working in restaurants and bars, also owned his own real estate business there. He met Ace when he arrived in Queenstown and started working for Good Group. Ace, also with eight years hospitality experience, was managing The Boiler Room and Minus 5º ICE BAR bars. 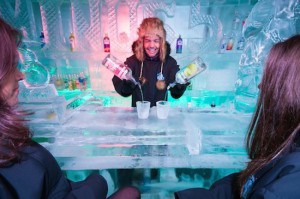 “In 2011 there was an opportunity to buy both of those bars and Chris helped finance that,” says Whalley. “Up until then Minus 5º ICE BAR had no competition, but a second ice bar opened in Queenstown so we invested significant time, money and resources into marketing that and making it a real experience for Queenstown.”

In May this year Future Bars employed a dedicated Minus 5º sales and marketing manager, Laura Palmieri, and by early August – Queenstown’s peak ski season – the bar had 299 more patrons through the doors than it had during the same week last year.

Last November the company also employed New Zealand Ice Blacks captain Bert Haines as its group hospitality manager. Haines had more than 10 years experience, including a long stint for Queenstown-based Watertight Group, as its former general manager for Winnie’s. He’s also worked for DB Breweries and NZ Ski’s food and beverage team. Haines brings strong leadership, management and a wealth of hospitality knowledge to the group. “We’ve seen some great results so far and we’re super excited about Rhino’s, which only opened in July.”

Established in the old Debajo basement bar site along Queenstown’s Cow Lane nightspot, Whalley argues Rhino’s is the first authentic European-style après ski bar to open in Queenstown in many years. Future Bars traded the site as Debajo for a year, after taking over. “But it didn’t do much for us,” says Whalley. “We did a reccie of basement bars in Auckland and Sydney, had a round table and came upon the alpine theme. It seemed a perfect fit for the stunning alpine resort that is Queenstown.”

Rhino’s Ski Shack was initially intended as a pop up for winter. “But as we developed it there had been far too much investment for a pop up so we’ve launched long-term,” says Whalley. In the first month they’d had to up their staff from four  to 11 to cope with demand as skiers and snowboarders arrived straight off the mountain ready to tuck into Rhino’s signature big hot pretzels – either jalapeno and cheese or original, served with mustard, eggnog shooters, hot buttered rums and spiced mulled wines.

Rhino’s European après ski theme with its timber-clad alpine lodge fit-out, garnished with vintage skis and boots, hip branded apparel, cutting edge photography and injections of street art is unique in Queenstown. The long communal benches and seats are reminiscent of the Asian Wagamama restaurant style. ‘Beer fairies’ arrive promptly to serve the tables and Whalley says the emphasis on speedy table service means the average spend is doubling what was expected.

Future Bars other Queenstown bar, The Boiler Room, a cocktail bar on the Queenstown waterfront, and Minus 5º ICE BAR have both experienced three years of consecutive growth. During the early hours, there’s a queue out the door to get a spot dancing on the tables at The Boiler Room.

In a ski resort town where the temperatures often drop to minus 5 at night, you may wonder why people would flock to an Antarctic experience indoors, but they do. “It’s becoming a must do on the Queenstown tourist circuit,” says Whalley.