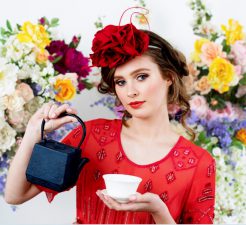 Auckland’s celebrations of the 2017 Melbourne Cup have Trelise Cooper and SKYCITY partnering to bring the very best of fashion and food together to deliver New Zealand’s longest runway show on Federal Street. Auckland, Flemington has arrived!

The event, set across five of SKYCITY’s restaurants, Huami, Gusto at the Grand, MASU by Nic Watt, The Grill by Sean Connolly and The Sugar Club, will offer options for a long lunch or four course dinner, Trelise Copper runway show, and screening of the big race.

At more than 400 metres long the runway loops through the restaurants, with the grand finale reaching the lofty heights of The Sugar Club on Level 53 of the Sky Tower. More than a dozen models will be showing garments from Dame Trelise Cooper’s Trelise Cooper and Cooper Spring-Summer 2018 collections – with a focus on event and race wear, of course.

Fashion on Federal is set to become an annual event at SKYCITY on the first Tuesday of every November, raising the bar of Auckland’s Melbourne Cup celebrations.

“Flemington is all about high fashion and fine food and Fashion on Federal brings the very best of both together, and to be partnering with an icon like Trelise Cooper certainly reflects this,” says Lizzie Leuchars, SKYCITY Corporate Events Manager.

For those escaping work early, lunch begins at 12.30pm with the first of three runway shows starting at 2pm. For those with a later schedule, The Sugar Club event starts at 4pm in time to catch the Melbourne Cup race and enjoy a four course degustation dinner afterwards.

In Melbourne Cup style, guests are encouraged to dress to impress with the ‘Best Dressed’ from each restaurant winning a night’s stay in SKYCITY Grand Hotel. The five finalists will be judged by Dame Trelise Cooper herself with the overall winner receiving an additional prize package including an upgrade to the SKYCITY Grand Presidential Suite.