Auckland will celebrate in green this March for the 25th anniversary of the city’s much-loved St Patrick’s Festival, with family-friendly festivities set to take place across the city from March 9th – March 24.

For the very first time, SKYCITY’s Federal Street will come alive with the sights and sounds of Irish traditions with the inaugural Get Your Green On event, an all-new St Patrick’s Festival celebration on March 16  from 4pm – 10pm. To celebrate all things Irish, the St Patrick’s Federal Street Festival will host family friendly entertainment, live music, dance troupes, Irish market stalls all under the Sky Tower which will illuminate green after a lighting ceremony when the sun goes down.

New Zealand is the first in the world to celebrate St Patrick’s Day, and in 2019 the hugely popular Hugh Green Group St Patrick’s Parade will return to Queen Street with celebrations from midday, March 17. The only festival of its kind in the Southern Hemisphere, this year’s festivities will feature Irish-inspired floats, traditional music and dancing, marching bands, and the Rose of Tralee! 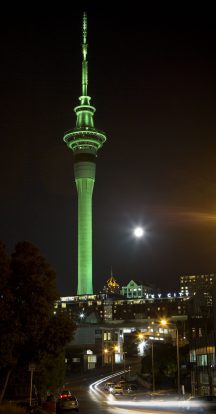 Following the parade, entertainment will continue at the Irish Music and Dance Festival on Queen St near Aotea Square, where the whole family will be able to enjoy the spirit of St Patrick.

A host of iconic Auckland landmarks will turn a radiant green from March 16, including the Sky Tower, Eden Park, the Harbour Bridge, Viaduct Harbour, Queen Street’s lights and the Auckland Museum. More than 300 landmarks around the world will follow Auckland in being lit in shamrock green.

Russell O’Brien from the St Patrick’s Festival Trust commented: “This year’s St Patrick’s Festival is set to be our best yet, with more family-friendly and authentic Irish activities on offer than ever before. We’re thrilled to be returning to Queen Street for the March 17th celebrations and to once again see Auckland lead the world in turning green.”

The St Patrick’s Festival would not be possible without the generous support of its sponsors, The Hugh Green Group, Lion Foundation, Barfoot and Thompson, Four Winds Foundation, Government of Ireland, Foundation North and Property Press.