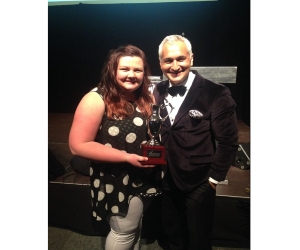 It was an all female finale at the inaugural Tonnellerie de Mercurey 2015 New Zealand Young Winemaker competition on August 27.
Hawke’s Bay Winemaker, Lauren Swift took the inaugural title after she battled it out following three days of winemaking challenges at the Romeo Bragato conference.
Lauren says: “It was an extremely tough competition, I’m really thrilled with the result. It’s been such a great opportunity for me, and has already opened a number of doors and given me so much confidence.
“I look forward to doing this title proud in the year ahead and I would like to acknowledge the support that Ash Ridge Winery, the event sponsors and the organisers have given to the event and me personally.”
In a similar but more rigorous format to the three regional competitions that took place in Hawke’s Bay, Marlborough and Central Otago, the national event covered four main areas. Competitors were tested on laboratory skills and wine judging, made a presentation to a wine industry panel, sat a technical exam and completed a comprehensive budget scenario.
Young Winemaker of the Year, chairperson, Sophie Matthews said, “Having the final as part of the Romeo Bragato conference has been an excellent platform to introduce this high-level competition to the industry. New Zealand’s young winemakers are getting the deserved recognition from their industry peers.”
“The competition was long overdue and we wanted to create a new event that thoroughly tested many facets of the role that winemakers face every day. We are thrilled with the calibre of the event components, the investment from industry partners, and the acceptance that the event has received from the industry. This year’s event has been a huge success and we have had a lot of interest for next year in this growing competition,” said Ms Matthews.
Sherwyn Veldhuizen of Tonnellerie de Mercurey said, “This event is really positive for winemaking. There are some great winemakers in New Zealand and this is a fabulous way to nurture emerging talent, which can only strengthen and build our industry.”
Places in the Tonnellerie de Mercurey 2015 New Zealand Young Winemaker competition:
1st Lauren Swift, Ash Ridge Wines (Hawke’s Bay)
2nd Abigail Maxwell, Babich Wines (Marlborough)
3rd Abby Gallagher, Mt Difficulty (Central Otago)