Any hopes Nic Watt might have had for a quiet life since moving back to New Zealand have gone out the window with the opening of his new Japanese restaurant Masu, and even more so since the restaurant’s slew of awards in the recently-announced 2014 Metro Restaurant of the Year Awards. 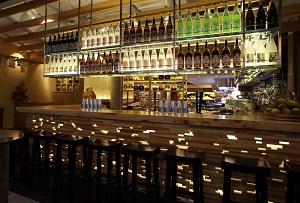 The restaurant – the latest addition to the increasingly impressive offering along Auckland’s Federal Street – opened in October last year after a flurry of activity to get the newest addition to Sky City’s restaurant stable ready to wow diners.

Watt made his name in London after a stellar career as chief operating officer of one of the most highly regarded Japanese restaurant groups Roka, younger sibling to Zuma Restaurant Group. His fans included not just celebrities like model Kate Moss and Coldplay singer Chris Martin but also Michelin-starred chefs like Heston Blumenthal and Michel Roux Jr.

“We came home because this is a great place to bring up our children and it was time to come home to a different pace of life. We went from the position of running five restaurants around the world to having one restaurant 15 minutes from home.”

Masu Japanese Robata Restaurant & Bar is located opposite The Grill by Sean Connolly and beside the lobby of Sky City’s Grand Hotel, and joins a stellar array of top-end eateries in Federal Street dining precinct. As well as Masu and Grill, Al Brown’s Depot and Federal Street Delicatessen provide a cracking choice of fine dining along Federal Street, while Peter Gordon’s Sugar Club overlooks them from the Sky Tower. “It really is a premium dining area now,” Watt says.“To have neighbours like Sean, Al and Peter are fantastic.”

The beating heart of Masu is the robata cooking hearth where diners can see the chefs creating food-laden skewers and slowly rotating them over hot coals. “I’m there 24-7 at the moment, so if you come in, you’ll see me there cooking,” he says.

Robata literally means ‘fireside cooking’ and originates from a centuries-old, country style method developed by northern Japanese fishermen around a communal hearth. Guests can perch at the sake and shochu bar. Drinks are chilled with hand-chipped ice cubes made from clear, deoxygenated ice to avoid diluting the beverage. And regulars can purchase their own kume jars which are filled with bespoke shochu blends and these are then displayed on shelves throughout the restaurant and made available to the owner at each visit.

Watt says the idea links back to the Japanese bar custom of patrons having their own bottle to imbibe from when they visit. But the drinks list doesn’t just run to sake and shochu.

“We’ve got an outstanding array of wines on our list and all the still wines are from New Zealand, because we make such good wines here. The only exception is our Champagne selection, naturally. We also have 40-plus sakes and we’ve developed our own Masu sake with a producer just north of Tokyo.”

The Masu menu is impressive, with several signature dishes to the fore. They include tartar of salmon and tuna with house made rice crackers, tempura yellow belly flounder with chili ponzu and lamb cutlets, gochujang hot pepper, pickled onions and carrot. “Each serving is about a single dish that stands alone of its own accord, making its own statement,” Watt says. “That single dish presents itself as memorable but alone, set apart from although entirely complementary to the other dishes presented. It’s all about having passion for flavour and dedication to detail.”

At Masu, he is supported by head chef Darren Johnson – who worked with Nic at Roka – and restaurant manager Matthew Aitchison, formerly at The French Café. Watt says Japanese cuisine is all about the natural flavour retained by grilling the food rather than the accoutrements added to a pan.

The method is similar to a barbecue where items of food on skewers – seafood, meat and poultry with vegetables – are slow-grilled over hot charcoal. “It’s about simple, elegant purity of flavour. Take the belly of tuna, for example; all it consists of is tuna, wasabi and soy sauce. Three ingredients – how do you beat that?”

Masu is deliberately open plan. Between the earthy entrance foyer and glass-enclosed private dining area called The Obi Room, there are only two pillars in the entire restaurant. Masu seats 18 in the private dining room, 100 in the restaurant and 16 around the open charcoal hearth.

“Everything was designed with the input of my wife and myself and we had a wonderful architect, Gordon Muller, who was able to realise our vision. It’s a beautiful space, but we didn’t want people to feel intimidated. We want people to be comfortable and whether they are looking for fine dining or something more casual, they’ll find it at Masu. Our prices won’t scare people off, either; they cover everyone, because we want people to be coming here three or four times a week.”

Masu’s opening coincided with Watt’s other all-consuming project – TV3’s new cooking show Testing the Menu. The show saw Watt delve into the Kiwi palate and the Kiwi psyche, looking at what we love about our favourite Kiwi dishes and then gave them his own Japanese twist. Fish and chips, spaghetti bolognese, pizza, BBQ and Sunday roast all received a Japanese makeover.

And after a globetrotting life spent wowing the taste buds of the rich and famous overseas, Watt is happy to be contributing to what he believes is developing into a serious food culture here in New Zealand. “There are genuinely world-class restaurants here already that you’d be happy to find in New York or London. You could pick up Café Hanoi, for example, and drop it into any city in the world and it would be a huge success. The Kiwi food culture is really exciting now.”

All images by Michael Bradley.

We’re leading the search for New Zealand’s Outstanding Food Producers. The awards – which celebrate Kiwis who harvest, grow and make food and drinks – were first held in 2017. Each year a team of specialist[...]
View Calendar