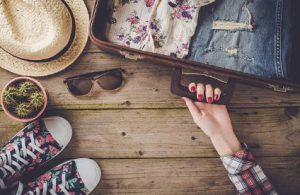 MGallery is a pioneer in addressing the distinct needs of the female traveller, with its special offering designed especially for women: Inspired by Her. Through it, MGallery has been responding to and anticipating the demands of their female clientele with exclusive services and special considerations throughout her stay.

Committed to making Inspired by Her the best it can be, MGallery launched an in-depth study with the global marketing research company, IPSOS, to examine the habits and requirements of the female traveller. Close to 3000 participants in 4 countries – France, Italy, Great Britain and Australia – were surveyed on the specific expectations of women staying at upmarket hotels.

The results will help MGallery further enrich its Inspired by Her offering to the benefit of traveling women from around the world.

First things first: Women (and a majority of men who were asked) like the idea of a hotel offering devoted to women.  86% of women surveyed (and 80% of men) were in favour of a female-oriented hospitality programme within a hotel, with 36% of women believing that the female-focus is a genuine need that is currently unmet.

What do women want in a programme designed just for them?

Up until now, the concept of “well-being”, with an emphasis on spas, detox menus and work-out facilities, has been the running assumption within an industry struggling to acknowledge the growing female market.  But while physical well-being may be a part of the equation, the truth, as revealed by this ground-breaking MGallery study, is that women want a more holistic approach to well-being. The difference is in the TLC details and what the French like to call “cocooning”, which roughly translates to the sense of being swaddled and shielded from the non-stop juggling that marks most modern women’s lives.

Comfort is key, with 73% of women asked stating that luxury linens, thick towels and other such simple indulgences are among the three main reasons they chose luxury hotels for their stays. The other two main reasons are the attention paid to detail (53%) and the efficiency and perfection of service (47%). It is the little things that matter; niceties that are all too easily neglected when balancing a career and a busy home.

Of the amenities that women really like to have in their room, a shower with massage jets (69%) tops the list.  A few extra moments under a power-shower can wash away the cares of the world. At 65%, the second favoured item is a powerful hair dryer, which, as any women knows, is the difference between a good hair day and a bad day, period.  Like the third most popular item, a dressing gown in the right size (61%), these simple amenities are easily overlooked in a male-dominated industry yet are a consistent source of frustration for women. By making them available, MGallery’s Inspired by Her offering demonstrates a true understanding of how to provide women with a sense of well-being.

As for a specifically “feminine touch” in a luxury hotel, 63% of all women surveyed agreed that this was best conveyed by presence of fresh flowers (compared to 56% of men) while 43% perceived it in the material quality of the décor (such as the fabrics and carpets) and 42% noticed it in subtle service details.  In what might come as a shock to those who think that a spa constitutes a “feminine touch” at a hotel, the presence of a spa at high-end hotels seems taken for granted by European women, compared to the 39% of Australian women who feel that a spa is in itself a special nod to the ladies.

The Challenge of Packing

Although 10% leave it to the last minute, the majority of women (66%) like to take time packing their luggage when traveling with their partner, tackling the task 2 days before the day of departure. (71% of men like to take their time too.)  Yet despite their care and effort, 73% of women systematically forget to pack an essential item – perhaps the result of “Mommy Burnout” and the pressure of preparing for departure day.

Cosmetics are more likely to be left behind than clothes, with the top three being nail polish remover (32%), razors & sunscreen (tied at 21%) and make-up remover (18%). Available through MGallery’s Inspired by Her program, forgetting one of these beauty essentials is one less thing for a busy woman to worry about.

Offered a choice of Detox, Continental or Savoury menus to start their day, a mere 14% of women said that they would select the often female-targeted Detox option, compared to 12% of the men.  Instead, 20% of women (and 21% of men) specifically prefer to treat themselves to the croissants and sweet pastries of a Continental basket (so much for “gluten-free”…) and 55% of women said they love it all, including the bacon-and-eggs Savoury option, although oddly enough, more Aussie ladies were up for a “full-English” than their British counterparts. Regardless of a woman’s culinary culture, it seems that ladies are happy to pass up the healthy option for something more indulgent. As for working-off all of those surprising breakfast calories, more than half (51%) of women questioned envisage themselves making their way to the hotel gym during their stay. However, despite best intentions, only 19% of all women surveyed manage to take some treadmill-time while they’re away.  (The men fare marginally better with 56% intending to go to the gym and 25% actually getting there, quite possibly in the time it takes the ladies to struggle with a weak hairdryer or go shopping for their forgotten nail-polish remover…)  No wonder 60% of women said that they appreciate the availability of small sports equipment (like a yoga mat) in their rooms, as found in MGallery Inspired by Her accommodation – another example of how it’s the little things than count when it comes to women’s well-being.