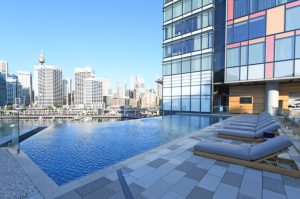 Sofitel Sydney Darling Harbour was officially opened on 3 October 2017 by The Hon. Adam Marshall MP, Australian Minister for Tourism and Major Events, making it the first new build, international luxury hotel to debut in Sydney’s CBD this millennium.  It is also the first new Sofitel property to be built in Australia.

The launch of the Sofitel has broken a 5-star accommodation drought that stretches back before the Sydney Olympics, with the last internationally-branded luxury hotel opening  in 1999.

The opening of the Sofitel heralds a renaissance of new hotel development in Sydney, with over 40 hotels scheduled to open over the next five years to support the city’s record breaking tourism growth.

For such an auspicious launch, the hotel’s owner, Dr Jerry Schwartz, and Chief Operating Officer of AccorHotels Pacific, Simon McGrath decided to offer the whole hotel to 33 charities to support in their fundraising. As a result, $508,000 was raised by the charities supporting a range of causes including medical research, disadvantaged children and families, education, Indigenous development and homelessness.

“Being the most important hotel opening since the Olympics, we wanted to once again involve the whole of Sydney by supporting charities that do so much for communities across the city and the State,” said Dr Schwartz.

“This hotel launch will also help cement Darling Harbour as one of the world’s most dynamic tourism and events precincts, and power future international and domestic demand for the city.”

Simon McGrath said, “Sofitel Sydney Darling Harbour will be a landmark hotel for Sydney and with its proximity to the International Convention Centre, the hotel will help bring major conferences and events to the city and will be a significant contributor to the tourism sector.

Centrally located in the vibrant, newly transformed city precinct, opposite the International Convention Centre, the $500 million Sofitel Sydney Darling Harbour offers 590 guestrooms including the hotel’s 35 coveted suites, boasting some of the best views in Sydney.