Out of action FridWinner crowned in biggest Burger Wellington yet 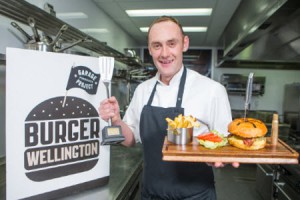 Burger Wellington has moved from a niche contest five years ago to the biggest event at the 2014 Wellington of a Plate culinary festival.  This year, an incredible 70 eateries put forward their best burgers, all matched with a pint of beer.  In the beginning, brave gourmands would attempt all 20 or so burgers.  Now, 70 burgers in two weeks would likely be fatal!  However, the success and growth of Burger Wellington proves Kiwi consumers love the combination of gourmet burgers and good beer.

The Best Burger/Beer Match went to The Holy Cow Burger by Cafe Medici.  This was a 100% Black Angus patty with dry-smoked local bacon, Kingsmeade Wairarapa Jack cheese, caramelised onions and craft beer mustard on a Clareville Bakery sourdough bun.  It was served with Texas Tea by Garage Project.  Texas Tea is a highly unusual 6.2% Cactus Brown Ale which the brewers describe as a “spicy and bold Texas brown ale brewed with a heady dose of American hops, habanero chili and prickly pear.”