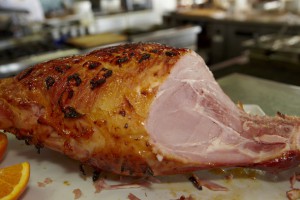 Wellington butchery cleans out category Gold’s for their 100% NZ hams.

The Wellington-based business was the stand out entry at the annual awards, with judges singling it out as the tastiest slice of the competition.

Sarginson, who is also the President of the New Zealand Chefs Association, led the judging panel of 33 food writers, renowned chefs and industry experts.

“It’s the first time we’ve had such difficulty nailing down a supreme winner and it wasn’t until after the judging that we found out the two top hams we struggled to rank came from the same butcher,” said Sarginson.

The Competition celebrates the finest bone-in and boneless hams crafted by New Zealand butchers using only 100% New Zealand pork. The four judges of the ‘Grand Final’ round were unanimous that Cameron Harrison Butchery delivered the most “ham-tastic” experience of aroma, texture, taste and all-important colour.

With 20 years working as a butcher under his belt, 38 year old Rob Cameron is ecstatic about the win.

“It’s great to know that all the hard work we have put in over the years has paid off. We are proud to call ourselves a traditional butchery producing quality artisan style products, always striving to be the best to deliver outstanding meat for our customers. This award gives us that recognition and we hope it will give the business a real boost.”

The butchery, owned and operated by Rob Cameron and Simon Harrison, includes two retail stores located in the Wellington suburbs of Kelburn and Ngaio. Cameron produces all his product at a factory in Wainuiomata where he also created the award-winning ham recipe.

“Our ham is made the old fashioned way, it is truly a methodical process with huge attention to detail and long hours spent to make such a top quality product using the finest ingredients,” says Simon Harrison.

Succulent ham on the bone remains a Kiwi favourite and with less than 12 weeks before Christmas, NZPork Chairman Ian Carter is urging Kiwis to place their Christmas ham orders now to avoid disappointment. “Coming up to Christmas there’s huge demand for locally grown, 100% New Zealand Christmas hams and they invariably sell out before the big day, so get in quick while you can!”

To find out more about 100% NZ pork, bacon and ham go to www.pork.co.nz