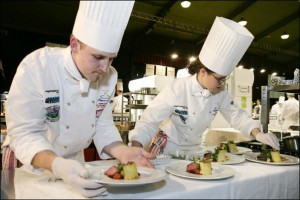 Hospitality students from around the country will put their culinary and restaurant service skills to the test in July, when they battle it out for the top title in this year’s Nestlé Toque d’Or competition.

The event will celebrate a 25 year milestone birthday, and pits the country’s top talents against each other in a live kitchen cook off that has been fiercely contended for many years. Last year, Otago Polytechnic Cromwell Campus took out the top title.

NZChefs National President and organiser of the event, Graham Hawkes, said the event is considered by those in the hospitality industry to be the pre-eminent student culinary and front of house competition. “Menus and practice routines in the lead up to the big day are a closely guarded secret not too dissimilar to that of a well-known international yacht race,” he said.

“On the day, while everything on the surface might look like plain sailing to an onlooker, scratch the surface and you’ll find underneath all sorts of finely honed techniques aimed at helping a team to gain the upper edge on the day.”

Each competing team comprises three students – two culinary and one restaurant service students – drawn from the country’s top training institutes. This year, 12 institutes have signed on for what will be a hotly contended title. They are:

Teams have to battle against the clock and each other in a live cooking arena set up to replicate a working restaurant. “Competitors must prepare and serve six covers of a three course meal within an allotted timeframe, while a panel of judges scrutinises their work,” Graham said.

A team of judges mark students against World Chefs’ criteria that include things like taste, service of food, presentation, food preparation and hygiene.

In the months leading up to the big event, teams will spend hours training to perfect their menus and rehearsing how the dishes will be presented to guests dining at the event. “Everything needs to run like clockwork with a seamless dining experience delivered to guests, otherwise points are lost.”

Competitors are given in advance a list of ingredients that they can use and it is up to them to create a menu that will impress the judges. Included in this year’s line-up of ingredients are: Nestlé Professional products, fresh and seasonal New Zealand grown vegetables, New Zealand beef and Akaroa Salmon.

Nestlé Toque d’Or will be held on 30 July at the Auckland Showgrounds. An awards dinner will be held later in the evening where the winning team will be announced.