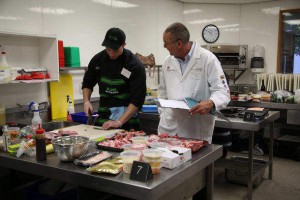 The best young butchers in the Upper South Island have been announced following the Alto Young Butcher and Competenz Butcher Apprentice of the Year regional final on Saturday.

Rowan Lee from Peter Timbs in Bishopdale was the winner of the Alto Young Butcher category, while Matthew Clemens from New World Ilam topped the Competenz Butcher Apprentice category, both highly sought after titles.

Entrants displayed their skills in a competitive cutting test, where they were expected to turn a beef rump, pork loin and a size 20 chicken into a display of value-added cuts in just two hours.

They also sat a written exam and were interviewed by judges to test their communication skills and knowledge of the trade.

Rowan developed a passion for butchery by helping his father, also in the industry. “My dad is a butcher and so I initially started helping him and then kind of fell into it. I am a firm believer if you can find a job that isn’t a hobby and you love it, you are winning.” No stranger to the competition, this will be Rowan’s third time at the Grand Final.

Preparing for his second year at the Grand Final, Matthew enjoys being surrounded by the best in the industry. “Everyone is so keen but I reckon I can bring a different set of skills to the competition. I’m well organised and have a good plan in place,” says Matthew.

Matthew and Rowan now prepare for the national final held on September 10 at Shed 10 in Auckland, where they will compete against finalists from four other regions, vying for the prize of an international butchery study tour.