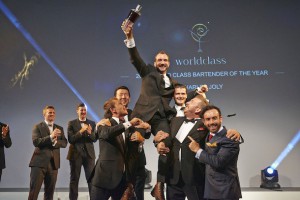 After a week of fierce competition, incredible craftsmanship, unrivalled creativity and exceptional cocktails, Charles Joly from The Aviary in Chicago, USA, beat 47 of the best mixologists from around the globe to be crowned the Diageo Reserve World Class™ Bartender of the Year 2014.

Charles mesmerised the judges from the very first cocktail but it was his unique and show-stopping signature serve that will help cement his name in cocktail history. His signature cocktail Above the Clouds, crafted for the final Punch and Glass challenge, blew the judges away. Throughout the week Charles consistently proved his winning credentials to the esteemed panel of judges that included legends and luminaries of the cocktail scene such as Dale DeGroff, Salvatore Calabrese, Julie Reiner, Steve Olsen and Gaz Regan.

“Wow, I just feel totally overawed by this. I know it sounds like a cliché but to be announced as the DIAGEO RESERVE WORLD CLASS™ BARTENDER OF THE YEAR 2014 is like a dream. The other finalists really are the best bartenders in the world today so for the judges to pick me as the winner is incredible” said Charles Joly.

“This journey didn’t start today at the ceremony, it started many years ago when I first started working in a local bar. I make drinks with my heart and it makes me happy to see customers happy. The possibilities open to a bartender are limitless, not just in terms of your career but your creations – the only limit is your imagination.”

Charles Joly will now become a global ambassador for Diageo Reserve WORLD CLASS™, a role which will see him travel the world, educating and inspiring new talent whilst developing his own skills and knowledge through the different tastes and techniques they experiences along the way.

The 2014 WORLD CLASS™ Finals consisted of a series of innovative challenges staged around Great Britain, starting in Gleneagles, Scotland, before travelling via the iconic Orient Express to London. Discovery was at the heart of the competition, a theme brought to life by the series of innovative challenges that immersed the 48 finalists in Great British culture and inspired them to create premium serves, using the world’s finest spirits.

Don’t miss out on being part of New Zealand’s premier trade event for the food service, hospitality, and food retail sectors. The show promises to serve up inspirational ideas, solutions, and world class features over[...]
View Calendar
Add