Its 1st July, Canada Day, but we are now in the US. A toast to the Canadians. A friendly host, we thoroughly enjoyed our time in Vancouver with its culinary freshness.

First a recommendation. If travelling between Vancouver and Seattle, Amtrak it. Once you have survived the neurosis of US border control the journey is relaxing and visually stunning. If you were to drive the inland route is fairly monotonous (said a local) whereas the train ambles along the coastline for much of the 4 hour journey, and I mean right on the coastline. A few times as the train tilted slightly on bends I wondered at the laws of physics and that we didn’t tilt right over into the water or someone’s beach bonfire!

Seattle’s King St Station must be one of the lost wonders of the world. Glistening white marble. Never have I seen such a sparkling clean public building! The taxi ride to our houseboat through night-time streets gave us glimpses of an interesting cityscape and what I can only reference as a Kurt Cobain experience. Discovering we were Kiwis the driver entertained us with a song he’d recorded about NZ. Well we got a mention. As we listened to the grungy notes of ‘swimmin’ in Australian women’ he proclaimed the virtues of recent legalisation of marijuana and its facilitation of the high speed lane changing manoeuvres he was undertaking on the expressway. We did arrive safely and in record time apparently as the same trip the next evening cost $7USD more.

Recommendation 2. Staying on a houseboat in Seattle (in appropriate weather) is a wonderful thing to do. It takes only a few minutes for one’s sense of balance to acclimatise. We awoke to seabirds and sunshine and gently lapping water. Quite delightful to contemplate the day from a deck chair with a coffee on the pontoon (back yard) looking past other ‘backyards’ towards the downtown city scape. And unlike the movie I had slept extraordinarily well. 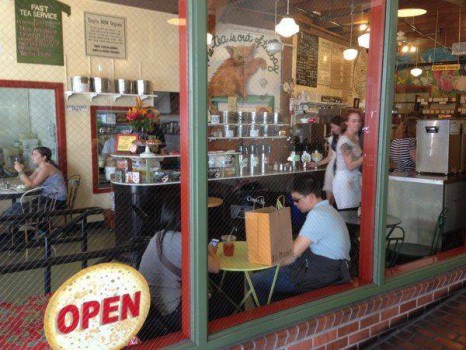 1st July in Seattle was the hottest day of the year (said locals). We started the day at the Pike Place Market crumpet shop, then moved on to French bistro Le Pichet (and I did feel momentarily transported across the Atlantic) for an early lunch before hitting the market proper. Now this is a market. We had been a little disappointed by Vancouver’s Granville Island which had a feel of being slightly sanitised by tourism. Pike Place is multiple floors of food, junk, antiques, food, dodgy fashion, lots of fresh fish, junk, crafts, cheese, coffee, spices etc etc. The antics of the infamous fish mongers is worth a moment or two. You won’t need to find them, you’ll hear them! They also have a book out on the subject.

In amongst all that, I discovered a culinary school. An online school. Chef Steps. People individually tuning in to computerised classes and completing practical sessions in the fully equipped open plan area. Should I fear for my job?!

Then up to the Capital Hill district in search of a cool drink while we considered the culinary plan of attack for the evening. An eclectic and fascinating area. The wonders of the North West’s most extensive whiskey bar, Canon, eluded us as it didn’t open for another couple of hours so we headed across the road to Stumptown coffee roasters for an iced coffee (read cold filtered black coffee). US was losing the world cup to the Belgians in the bar next door. Meanwhile I accidentally stumbled upon Stumptown’s coffee roasting operation in the basement. A fascinating tour and conversation and a few recommendations later and we were headed back down the hill to Melrose market on the edge of the district.

Chef Matt Dillon is doing wondrous things in the Seattle culinary scene both in terms of the food and décor he designs. We spent the rest of the evening experiencing 3 of his 7 Seattle establishments. Firstly dinner at Sitka and Spruce where the chefs cook beside the guests at the end of a long communal wooden table. The food carries on the theme of fresh inventiveness, down to shelling fresh chickpeas to accompany the delectable octopus and squid ink appetiser. Many thanks to Richard the maitre’d for his supreme friendliness, informative professionalism and recommendations to visit Dillan’s London Plane and Bar Sajor downtown. 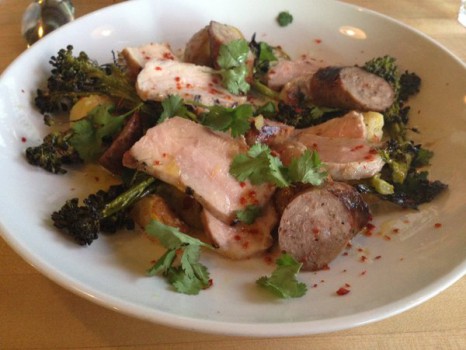 Around 1st Avenue and Occidental near the King St station is another eclectic area undergoing some revitalisation. A glass of wine and conversation with Cody at the little London Plane, a sample of the house made whipped butter and sourdough, and then a trip across the cobbles to Bar Sajor. Oh for the capacity to enjoy another dinner. But we settled for a drink and sharing dessert. House made nocino, bread soda and the hazelnut cake recommended by Jonathan the maitre’d heated over the Basque grill. I wondered at the skill and tenacity of the young all female brigade of chefs working the wood fired grill and oven. I was in heaven. 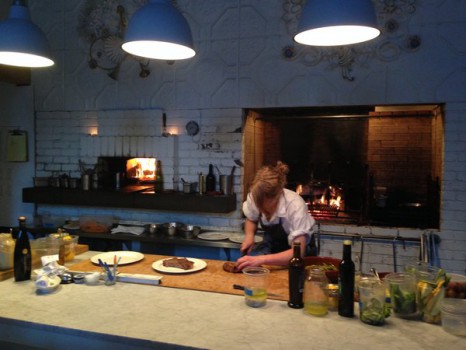 Finally back to the houseboat to sit on the pontoon, city lights tinkling, with plans to return in the morning to sample the house made yoghurt and breakfast fare of the larger London Plane. Main conclusion of our contemplations: we REALLY like Seattle!