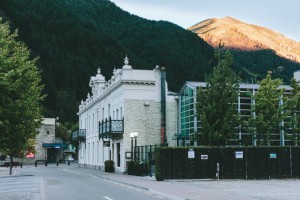 Eichardt’s Private Hotel recently took out the distinguished title of New Zealand’s Best Ski Boutique Hotel at the annual World Ski Awards, the third gong in as many months for the hotelier.

Located on the shores of Queenstown’s Lake Wakatipu, the luxury hotel was presented the award at a black tie Gala Ceremony held November 22 in Kitzbühel, Austria, the home of the World Ski Awards.

Widely considered ‘the Oscars of the travel industry’, the World Ski Awards is the sister organisation of the World Travel Awards currently celebrating its 21st anniversary and acknowledges exceptional success in the ski tourism industry. A record number of votes had been cast this year by leading ski tourism professionals worldwide as well as from hundreds of thousands of ski bunnies across 127 countries.

Eichardt’s Private Hotel owner Andrew Cox said the internationally recognised award was an exceptional honour and reward for our commitment to excellence. “We are truly honoured to be recognised by our industry peers along with the public as the best ski boutique hotel in the world. Eichardt’s is a special property with an obvious affinity with the ski community.  We’re proud our dedication to providing top service to our discerning guests – both on and off piste – has been recognised.”

Eichardt’s Private Hotel is no stranger to international recognition, in the last 3 months having won the HM Award for ‘Best NZ Hotel’, as well as taking away the title of ‘World’s best luxury ski resort hotel’ at the 2014 World Luxury Hotel Awards.