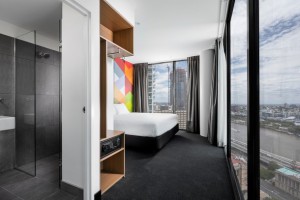 Australia’s largest hotel operator, AccorHotels, together with London AIM listed hotel owner and developer, Action Hotels, has announced the completion of the 368 room new-build ibis Styles Brisbane. The property will open as ibis Styles Brisbane Elizabeth Street on schedule by the end of Q1 2016.

The 368-room ibis Styles Brisbane Elizabeth Street will be the largest ibis branded hotel in Australasia and AccorHotels’ first newly built ibis Styles hotel in Australia. Located at 40 Elizabeth Street, the hotel will be one of the most centrally located in Brisbane’s CBD, adjoining the Myer Centre and Queen Street Mall and within walking distance to government departments and the Brisbane Casino.

AccorHotels and Action Hotels are also pleased to announce that Mat Finch has been appointed as General Manager for the new property. Mat first joined AccorHotels in 2001, and has held a number of operational roles in Melbourne, Tasmania and Brisbane before being appointed General Manager at Quay West Brisbane in September 2011.

AccorHotels Pacific Chief Operating Officer, Simon McGrath said “We are excited to be part of this key development for Brisbane’s hotel sector in partnership with Action Hotels, and we congratulate them on reaching completion of the hotel build. The first Ibis Styles Brisbane Elizabeth Street is set to be a flagship ibis Styles hotel for the region and we look forward to welcoming guests to the property by the end of Q1 2016. The ibis Styles brand has kept up with the changing expectations of consumers through design-led affordable quality hotels in the economy space and AccorHotels will continue to expand the ibis Styles portfolio,” concluded Mr McGrath.

ibis Styles Brisbane is Action Hotels’ 10th hotel and its opening will increase the total number of operating rooms across the portfolio to 1,929, a 23.5% growth. AccorHotels and Action Hotels currently partner on eight ibis hotels and the partnership will see a further three hotels join the portfolio by the end of 2016.