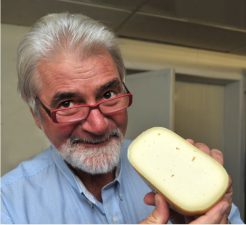 An unprecedented contingent of international experts has been announced as part of the judging team for the 2017 New Zealand Champions of Cheese Awards.

“The calibre of our judges this year is exceptional, in part due to the growing reputation for these awards, and New Zealand cheese around the world,” Master Judge Russell Smith, says. “We have eight phenomenal cheese judges joining 26 local experts, and collectively their wealth of knowledge is amongst the best in the award’s 15-year history.

“This provides an incredible opportunity to showcase New Zealand dairy on the world stage.”

The 2017 New Zealand Champions of Cheese Awards has attracted more than 350 entries across 23 categories. More than two tonnes of cheese will be judged over two days at the FoodBowl  in Auckland on the weekend preceding the gala dinner  awards evening to be held at the Grand Millenium Hotel on March 14.

In recent years the Dutch cheesemakers have dominated the gold and supreme awards. This year has seen a surge in Italian-style cheeses and flavour-added cheeses, along with new cheesemakers and industry icons vying for accolades for their cheese, yoghurt and butter.

Australian-based Smith, who travels the world as a cheese judge, will oversee the highly-sought after awards. They will be judged in pairs by a technical judge and an aesthetic judge, and graded into gold, silver or bronze standard before the gold-award winners are assessed by the entire judging panel for the Champion Cheese accolade for Artisan and Commercial producers.

The judging line-up includes Cathy Strange, from Austin Texas, a global cheese buyer for the powerful Whole Foods Market chain of hundreds of stores across the US, Canada and UK.

France has awarded the former American Cheese Society president with membership in the Guilde Internationale de Fromagers, and Strange was also recognised for her dedication to preserving the craftsmanship of the Italian cheese with the “Coltellino d’oro,” or golden knife, by the Consortium of Parmigiano Reggiano.

“The millennials are very active with food exploration,” Strange said recently. “They know a lot of flavours, and so they’re very educated around food. They have a lot of things that we didn’t have when I was younger. And the older generation is losing their taste buds, so they’re liking more flavourful cheeses. In short, it’s a great time to eat cheese.”

Another new international judge is Craig Gile, a cheese-making tutor at the Vermont Institute for Artisan Cheese, Wisconsin. Gile grew up on a dairy farm and has spent more than a decade as a cheese grader for US dairy co-operative Cabot.

“I usually refer to my job as babysitting cheese. I do really think of them as having their own personalities,” he says.