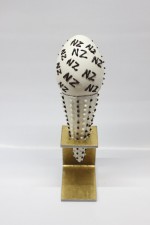 When Auckland-based artist Giapo Grazioli made a promise to re-invent the way we view and experience ice cream, we knew to expect more than run-of-the-mill chocolate this Easter.

With a decadent new design called Easter in Aotearoa, Giapo is delivering on his promise by creating the first cone of its kind – and in the process, he puts New Zealand ice cream firmly on the world map for creativity and innovation.

The 100 mm-tall custom built egg is custom made using 3D printed moulds that have been created in house. The edible, chocolate-coated waffle cone is filled with a New Zealand-inspired ice cream flavour comprising avocado, macadamia and white chocolate.

“We don’t see this as just an ice cream – it is a new way to celebrate Easter,” Giapo says. “It’s the first of its kind and enables us to embrace Easter in our own special way, rather than following the standard route.”

It took 10 weeks of engineering and construction with more than 10 prototypes created before Giapo found the perfect Easter in Aotearoa design. It takes around four hours to create just 12 handmade Easter in Aotearoa chocolate eggs because, unlike the traditional serving style, the ice cream is concealed within the cone “building the anticipation before the first taste”, Giapo says.

“The Easter inspired creation has been under development for almost two years because originally, I did not have a way to create it,” he says. “The 3D printer is amazing technology and we have embraced it as a world first in the ice cream world.”

Easter in Aotearoa was served from his Queen St store until Tuesday 7 April.