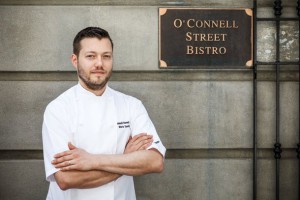 A new chef, a new menu and a new outdoor dining area. Long-time favourite on the Auckland dining scene, O’Connell Street Bistro has undergone some exciting new changes ready for the summer.

Mark Southon has taken over the stoves in the kitchen as head chef and has given the menu his personal touch, while also retaining some of the bistro’s old favourites. An outdoor dining area reminiscent of street dining in Europe adds a third dining option to the popular bistro.  Southon trained at numerous Michelin star establishments in Europe before embarking on a culinary tour down under landing a prestigious position at Vue de Monde in Australia. He then crossed the ditch to work at Wai Waterfront in Queenstown and The French Café in Auckland, moving to the Foodstore in 2010.

Chris Upton, proprietor and owner of O’Connell Street Bistro says he’s thrilled to see Mark take over as head chef. “His focus on fresh New Zealand produce and bold flavours brings new excitement to our menu. His genuine love for food comes across in his cooking and he is a breath of fresh air in the kitchen.”

Talking about his new head chef position, Mark says O’Connell Street Bistro is an icon of the Auckland dining scene and a hidden gem. “The restaurant recently celebrated its 18th birthday, an impressive track record for any establishment and I’m so excited to be working with such a great team talented of professionals.”

There’s a new grazing menu available from 3pm Monday to Friday and 5pm Saturdays, perfect for a sunny afternoon or evening in the new outdoor area or bar. It features dishes that can be shared and are less formal. Look for freshly shucked oysters, charcuterie and terrines, seafood, steak tartare, cheeses and more.

Replicating European bistro-style street-lined seating, the restaurant has brought its own outdoor dining to O’Connell Street. The outside area seats around 20, offering umbrellas for shade and heaters and cosy blankets for chillier evenings.

Renowned for its outstanding wine list and having recently won its 15th Wine Spectator Award of Excellence, O’Connell Street Bistro is now be one of the few establishments in the country serving Cristal champagne by the glass ($60 per glass). The wide selection of wines continues to change seasonally.

Additionally, diners can book out The Corner Room, the bistro’s private dining room (up to 26 guests). Having hosted Prime Ministers and European Royalty as well as loyal regulars, The Corner Room is a secret gem that can be hired out on request for celebratory dinners or intimate events.