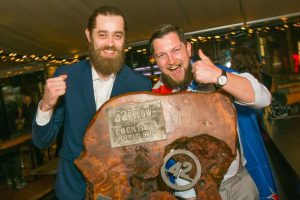 The results are in and whilst Australia has the overall bragging rights, with the highest score across their five teams, James Millar and Cameron Attfield from The Gin Room in Auckland, New Zealand are the 42BELOW® Cocktail Earth Cup 2016 champions.

The Cocktail Earth Cup, the Trans-Tasman sustainability focused cocktail competition, took place in Queenstown from Monday, 22nd August and ended on Wednesday, 24th August. Cocktail Earth Cup is an evolution of the famous 42BELOW Cocktail World Cup. Jacob Briars, the legendary (but retired) ‘Vodka Professor’ and director of global trade advocacy for Bacardi, explains, “Bartenders are extremely important to 42BELOW, and have always been our biggest supporters. We want to give them an opportunity to grow as bartenders, have some fun and compete against one another. It’s been a fantastic occasion to learn how to make drinks in a more sustainable way with some great speakers. All with the backdrop of Queenstown, which is the best example of the kiwi spirit. Great times in our beautiful backyard.”

The ‘up-cycled’ Sherwood Hotel was home base for the event that was comprised of challenges and activities to test the five Australian and five New Zealand teams’ cocktail-making, showmanship and dedication to sustainable bar practices.

The first challenge inspired the finalists to develop a brand new, ‘green’ cocktail using 42BELOW vodka at the heart of the drink. To ensure sustainability was at the forefront, points were deducted according to how many grams of waste were produced during the process.

From there, competitors were treated to a spectacular summit of Cecil Peak via helicopter where the ‘Sustainable You’ seminar explored the industry demands and how to keep one healthy in body and mind. Keeping environmental consideration at heart, all CO2 emissions during the week, including flights, were offset thanks to the Ekos Rainforest Carbon Boutique, a carbon offsetting organization with rainforest conservation projects in New Zealand and the Pacific Islands.

However, it would not be a true visit to New Zealand without an adrenaline spiking bungy jump off Kawarau Bridge. After which the teams competed in a mystery box challenge calling for a twist on a classic tiki cocktail. No power was necessary as the cocktails were blended via foot pedaling with a specially equipped ‘blender push-bike’.

The final showdown then saw the teams compete head-to-head in the ultimate bar takeover. The judging panel comprised of Jacob Briars, 2012 42BELOW Cocktail World Cup winner Steve Schneider, and owner of Red Hook and Coppa Spuntino in Brisbane Bonnie Shearston.

Getting behind the bar at five of Queenstown’s most popular institutions, with each bar hosting one team from New Zealand and one team from Australia. Participating bars were Jervois Steakhouse Queenstown, Bardeaux, Bunker, Bar Up and The Brecon St Merchant. It was up the teams to convince the good people of Queenstown to try their 42BELOW creations served in a compostable paper cup. The final opportunity to score vital points relied on the number of drinks sold, total takings and overall cocktail appeal.

Finally, World Bar hosted the official after party featuring NZ DMC Champion, DJ Spell where the winners were announced and the competitors partied in to the night.

Congratulations to all the competitors and we look forward to seeing winners, James Millar and Cameron Attfield from The Gin Room back in Queenstown next year as official judges for the 2017 42BELOW Cocktail Earth Cup.