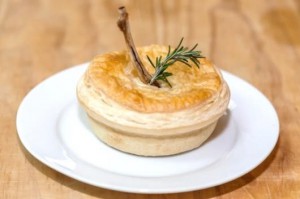 A lamb cutlet and kumara mash pie from a Wairarapa bakery has won the Bakels New Zealand Supreme Pie Award for 2014 this week.

A feast for the eyes and the taste buds, the hearty lamb cutlet and kumara mash pie from The Clareville Bakery in Carterton, Wairarapa has been judged the country’s best pie at the 2014 Bakels New Zealand Supreme Pie Awards. Baked by Michael Kloeg, the pie took out the coveted top title of Supreme Pie after impressing judges with its succulent taste and balance of ingredients.

The Bakels Supreme Pie Awards were announced at a Gala dinner at The Rendezvous Hotel in Auckland. This year’s Gold award for the Steak & Gravy Pie category went to Roger Cathro of Pak’N Save Petone. Gold for the Commercial/Wholesale Pie category was awarded to Gourmet Foods, Tauranga. 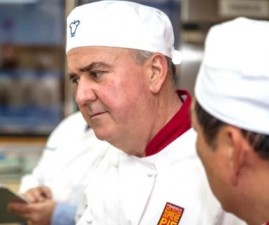 Competition was tougher than ever this year with a record breaking 4,832 pies entered by 533 bakeries from across the country – a 5% percent increase from last year. This year’s exotic entries included rabbit and wild boar, caramelised rhubarb and wildberry, chilli con carne, spiced duck with bacon, and a ‘cheeky cheese’ slow cooked beef cheek and cauliflower cheese pie.

Celebrity judge Simon Gault said it was great to see such innovation, particularly since the country has a strong tradition in its pies. “The top standard was really high. I think as Kiwis we should be very proud of our top pies. I could imagine the gold category winner pies being served in a restaurant,” said Gault.

PIE DAY FRIDAY!
Turning the classic Kiwi ritual into a good cause, Bakels is supporting Pie Day Friday on 1 August 2014. Bakeries up and down the country will be donating 20 cents from every pie sold to Duffy Books in Homes – helping to provide free books to over 100,000 New Zealand children. For a list of participating bakeries, visit: www.piedayfriday.co.nz