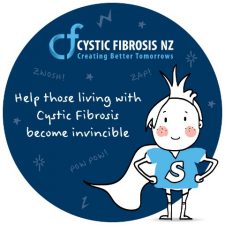 With more than 30 hotels across New Zealand under the Econo Lodge, Comfort, Quality and Clarion brands and the Ascend Hotel Collection, Choice Hotels again aims to raise over $15,000 for its charity partner.

Trent Fraser, CEO of Choice Hotels Asia-Pac, is thrilled to be involved in the fundraising efforts once again. “With one in 25 New Zealanders carrying the gene that causes the life-shortening chronic illness, we are passionate about making a positive difference to the lives of Cystic Fibrosis sufferers and their families, no matter how small,” says Fraser.

“This incurable genetic disorder robs sufferers of some of life’s simple pleasures and the things we often take for granted such as a long, healthy life or being able to start a family. Our partnership with Cystic Fibrosis NZ is all about improving the quality of life for those living with CF and making them invincible.”

“We encourage Kiwis to get behind this worthy cause by simply choosing a hotel room with Choice Hotels when they are travelling during Cystic Fibrosis Awareness Week.”

Jane Bollard, Chief Executive of Cystic Fibrosis NZ, says the money raised will go directly towards medical equipment, grocery vouchers, welfare and educational grants and emotional support through the organisation’s dedicated fieldworkers. “CFNZ helps nearly 500 people living with Cystic Fibrosis in New Zealand. Without the support of Choice Hotels this would not be possible, so we are incredibly grateful to Choice for its ongoing fundraising efforts,” says Bollard.

One mother, based in the South Island, knows only too well the unforgiving nature of CF, with both of her twin girls sadly losing their battle with Cystic Fibrosis as teenagers. She still campaigns to raise vital funds for Cystic Fibrosis NZ. “Without these people and everything they provide to the sufferers and their families, life would not be the same. It really does make a difference.”   Cystic Fibrosis is the most common life threatening genetic disorder affecting New Zealand children. The condition affects several organs, especially the lungs and pancreas, by clogging them with mucus. It can cause shortness of breath, a chronic cough and repeated chest infections. The average life expectancy for those with Cystic Fibrosis is significantly lower than the general population.