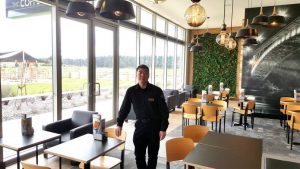 Hamilton’s first true motorway service centre sits on the major entrance route to Hamilton. Anchored by BP, it is home to a number of iconic retail brands. The Coffee Club Te Rapa Service Centre holds a prime spot next to the newly opened Perry Bike Park.

The launch is a fairly recent development. Only a fortnight ago, store owner, Richard Sun, was heading up The Coffee Club Centreplace. However, the lease expired and Richard was left with a team and equipment but no building. The Coffee Club swung into action and found Richard a new location in record time.

“I can’t believe how quickly head office pinpointed a new building for us. Everything was organised before we knew it and they helped us move everything across to the new site within a matter of days,” explains Richard. “That support – the fact that they are behind us 100% – is one of the reasons I really enjoy being a The Coffee Club franchisee.”

“We had a great time at The Coffee Club Centreplace and hope that our customers will come and visit us at Te Rapa Service Centre,” adds Richard. “I’ve brought my entire team with me and they are all very excited about getting started. It’s a bigger space than where we were before and has a really good atmosphere.”

The Coffee Club co-directors, Brad Jacobs and Andy Lucas, are both pleased that they were able to get Richard and his team into a new location so quickly.

“It was important to us that we found Richard a great spot to move to. He has been with The Coffee Club for almost seven years now and is a real asset to the business,” says Brad. “As luck would have it, we’d had our eye on the new Te Rapa Service Centre development for a while. We ran it past Richard and he agreed it would be perfect.”

“We think it is going to be very popular,” adds Brad. “It is conveniently located for both travellers and locals. Hungry drivers will be able to stop for a bite to eat or a signature blend coffee after filling up at the BP. It will also suit Hamilton residents being only 15 minutes from the city centre and surrounded by a number of other retail brands.”  The Coffee Club Te Rapa Service Centre has a breakfast, brunch and lunch menu that can be ordered from at any time of the day and is open Mon-Fri from 6:30am-5:00pm and Sat-Sun from 7:30am-5:00pm. It can be found at the corner of Te Rapa Road and Hutchinson Road, Horotiu, Hamilton.