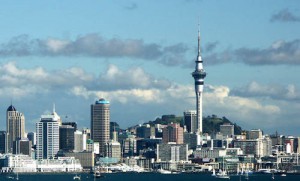 One in 12 (8.4%) jobs held by Auckland residents are supported by tourism*, according to new figures released today by the Tourism Industry Association New Zealand (TIA).

The value of tourism to Auckland is highlighted in the Tourism 2014 Election Manifesto, released today.

The Manifesto also highlights that the $4.83 billion a year that international and domestic visitors spend in Auckland is equivalent to 7% of the region’s gross domestic product (GDP).

“This highlights that tourism is a significant and valuable part of Auckland’s economy. But both the Tourism Election Manifesto and Tourism 2025, the industry-led growth framework, show there is plenty of potential to grow tourism even more,” TIA Chief Executive Chris Roberts says.

“We know that tourism supports regional communities across New Zealand, driving regional economic growth and creating employment opportunities. The interactive employment and regional visitor spend maps we are releasing today will help us clearly demonstrate that to central and local government politicians, business leaders, decision makers and their communities around the country.”

“These new regional tourism employment and spend figures paint a really clear picture of how the tourism economy benefits every region in the country, and will be incredibly useful in helping TIA members show their local Parliamentary candidates and decision makers the value of the tourism economy,” Mr Roberts says.

To read the full Tourism 2014 Election Manifesto, go to www.tourism2025.org.nz

*      The employment statistics are based on full-time equivalent (FTE) jobs held by New Zealand residents. They do not take into account the many short-term overseas visitors who work within the tourism industry from time to time. For more details, including the methodology, visit www.tourism2025.org.nz