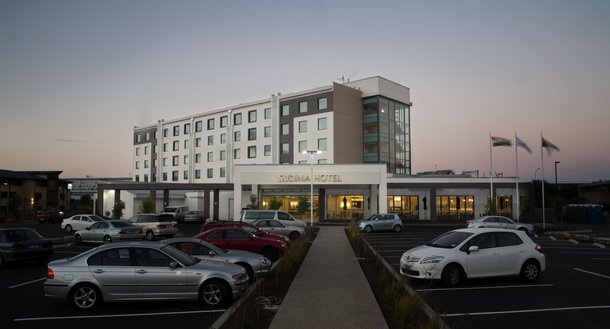 The five-property Australasian accommodation business Sudima Hotel Group has outdone itself. Sudima Auckland Airport was named a finalist in the Employer of Choice category in the 2013 Westpac Auckland Business Awards – South, and the company is now vying for pre-eminence in two categories in this year’s awards.

Sudima Auckland Airport was opened by the Prime Minister in 2011 and has operated at near capacity ever since. It has a multitude of sustainable features and recently became the first hotel in New Zealand to achieve carboNZero status in accordance with the ISO standard for reporting greenhouse gas emissions and removals.

Mr Morgan says although he felt somewhat uncomfortable putting himself forward for a Excellence in Leadership nomination, the subsequent recognition validates the whole Sudima team. “I think one of the tricks to being a good leader is to be as well-rounded as possible. You’re setting an example for the team so you need to be consistently professional, not just when you think it matters most.

“I talk a lot to our people about professionalism and the importance of being courteous and respectful at all times, and I’m willing to make unpopular decisions. Indecision is the enemy to building a strong business.

“You can only become a strong leader based on feedback throughout your career, so you have to be willing to take it all in, whether it’s easy to hear or not. I’ve also always looked for examples of good leadership, and you can learn as much from the poor leaders as the good.”

One example of an excellent senior executive Mr Morgan namechecks is the managing director of OfficeMax NZ, Kevin Obern. “I’ve come to know him through business and I admire that while his job is important and demanding, he still has the energy to be community-minded and do good things for others beyond his job description.

“I’m conscious of our organization doing that, because it’s invaluable not just for the community but for everyone in the business.”

Mr Morgan attributes the Best Emerging Business finalist position in part to the fact that Sudima Auckland Airport “started three years ago with no hotel, sales or guests. Since then our growth has been steady and balanced. We’ve not just attracted business, we’ve also been profitable and created a good return for the owners, and I believe the judges recognized the achievement in that.

“You have to have a steady approach when you develop a business, and treat the needs of the community, your guests and your staff equally. We have a happy team and one of the lowest turnover rates in the hotel industry, and we reward our staff well. For example, the only reserved car park at the hotel belongs to the Employee of the Year – there is no special treatment for me or the owners or anyone else in management – and people respond well to that egalitarianism. It fosters good feeling.”

Having worked in the hotel industry for nearly 20 years, and in senior management roles for the past eight, Mr Morgan first joined Sudima Auckland Airport ahead of its opening and was promoted to the trans-Tasman director of operations role in early 2012.

The winners of the 2014 Westpac Auckland Business Awards South will be announced at a gala event on 9 October 2014.