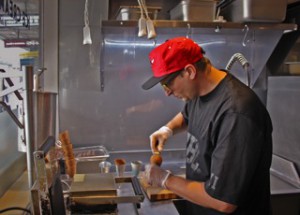 A local ice cream chef has developed a natural gluten-free waffle cone believed to be a world-first.

Giapo Grazioli’s breakthrough cone is made from egg white and almond meal and he thinks it’s the first gluten-free cone to be made from such natural ingredients.

Gluten intolerant or sensitive ice cream lovers have until now had to satisfy their craving by eating their favourite treat from either containers or cones made from not-so-tasty ingredients.

Now Giapo Grazioli from Giapo Haute Ice Cream in Auckland has developed a recipe that can be rolled in to shape without breaking and hand-rolled twice a day and baked fresh.

“There are gluten free cones on the market but they are a poor substitute because the flavour is compromised in order to make the recipe work,” Grazioli says. “By working only with the finest real ingredients we have been able to create a mixture that is flexible and also tastes great.”

While studying at AUT in 2011 Grazioli had researched ways to substitute other ingredients for gluten. During two months of research Grazioli and his team tried at least a dozen different recipes. His breakthrough came about earlier this year as he analysed a range of ingredients for their elastic properties.

“We found the solution in a cooked egg white and almond meal combination,” he says. “Albumin is the protein in egg whites and it unfolds when cooked through a process of coagulation called pyrolytic reaction.

“The reaction mimics the effect on glutinous proteins when movement is introduced as in kneading dough,” Grazioli says. “In this way we create a rich and elastic mixture that ensures the cooked cone doesn’t break like a thin biscuit.”

Importantly, the egg white and almond meal combination can be used as a substitute for flour in any recipe to make it gluten free Grazioli says. For the finishing touches the cones are hand rolled and coated on the inside with Grazioli’s signature dark chocolate.

The cones are now available at Grazioli’s Giapo ice cream store on Queen Street in Auckland at the same price as a regular waffle cone.