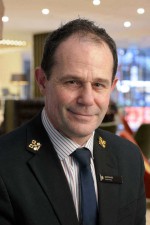 Speaking after the announcement, Jason said he was humbled and delighted by the external acknowledgement of a job he was passionate about, being done well. He entered the hospitality industry after his Olympic medal aspirations were ended with a motorcycle accident in 1990 resulting in the loss of a leg.  The avid sportsman, originally from Timaru, has continued to compete in different sports, but his desire to give others exceptional experiences led him to join the InterContinental Wellington team in 2000 as a concierge.

In 2006 Eade was inducted into the Hotel Concierge Society Les Clefs d’Or New Zealand and was the recipient of the HM Concierge Award in 2007, a remarkable achievement after such a relatively short period of time in the industry.  He became Head Concierge at InterContinental Wellington in 2012, an outstanding year as Eade also recognised part of his Olympic dream by being one of the few New Zealanders to carry the Olympic torch on its national journey through the United Kingdom as part of the IHG Olympic partnership.

Outstanding achievements over the last 12 months included: under Eade’s leadership the Concierge team had consistently increased their Guest Satisfaction scores to an enviable level in the Asia/Middle East/Africa region; his passion for developing team members and preparing them for the future had led to several internal promotions, consequently assisting the Wellington hospitality industry as a whole to be more focused and career-driven; he was part of the team that drove and won a bid to hold the Les Clefs d’Or 60th international congress in New Zealand – a three-day congregation of leading concierge from around the world.

General Manager Scott Hamilton noted in his support of the nomination that Eade puts the interests of everyone else – guests, colleagues and the brand as a whole – first, making him “the hallmark of a brand-hearted IHG employee in New Zealand”.

This year, of the 12 Concierge finalists, six were based at New Zealand properties, the other five located in Auckland. Two other InterContinental Wellington team members were recognised with highly commended status in their categories:  Scott Hamilton for New Zealand General Manager, and Geoff Naumann for Sales and Marketing Manager.