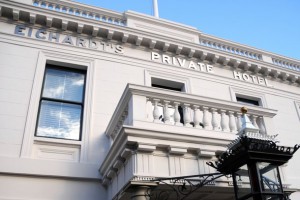 The Imperium Collection has appointed Tom Macaulay as its General Manager of food and beverage as it undertakes further expansion plans that cater to the increased high net worth demand in New Zealand’s premier alpine town.

Tom has most recently spent eight years as the operations and bistro manager of award-winning Amisfield Winery Bistro in Queenstown, where he notably escorted the visiting Duke and Duchess of Cambridge – Prince William and his wife Catherine – on their 2014 tour downunder.

The collective of luxury Queenstown accommodation and dining offers, that includes Eichardt’s Private Hotel, Eichardt’s Bar, Eichardt’s Lakefront Apartments, Eichardt’s Residence and No5 Church Lane Restaurant and Bar, has most recently announced a $10,000 per night Eichardt’s Penthouse with sweeping lake views currently under construction in the $6 million development next to the property.

The Eichardt’s Penthouse will also have a balcony space available for private functions that utilise its commercial kitchen and unrivalled vista across Lake Wakatipu to the snow-capped Remarkables beyond.

No stranger to the pursuit of excellence, during Tom’s time at Amisfield Bistro the restaurant won Cuisine Magazine’s Winery Restaurant of the Year three times and was awarded two chef’s hats.  He will be using his many years of experience to oversee the function opportunities for the current and new offers, streamline the group’s food and beverage operations as well as develop a new hospitality venture to be announced later this year.

“When planning our expansion of the Eichardt’s Hotel footprint and the upcoming hospitality addition, we identified that Tom had the local know-how and the international attention to detail that our guests expect, so we are thrilled that he has joined the fold.”

Tom is likewise well prepped for the discerning clientele, noting “the sector of travellers and diners that the Imperium Collection cater to know what they want. These people choose Queenstown because it offers a unique experience to share with their networks.

“I’m looking forward to enhancing an offer that melds understated luxury, safety, food, wine and activities which no other destination in the world can compete with.”