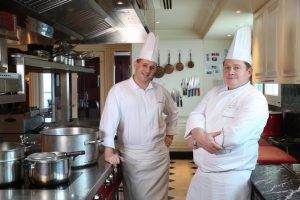 A trend that started with signs in hotel rooms asking guests to reuse towels is expanding its reach as green-minded accommodation providers work to mitigate the amount of food waste flowing from their kitchens.

One of the finest examples is in Thailand, where Sofitel Bangkok Sukhumvit’s executive chef, Jeremy Cayron, has chopped the four-year-old property’s food waste from about 13,000 kilos per month to 4,000.

At the same time, Cayron is cultivating his office terrace as a garden in order to minimize the need to call on suppliers to transport herbs and vegetables from across town. “It’s all about sustainability,” Cayron said. “How can we do more with less? How can we make lighter carbon footprints? How can we be better stewards for the planet?”

Sofitel Bangkok Sukhumvit began morphing into a model of environmental responsibility in October 2015, when it became the first AccorHotels property in the world to implement a cutting-edge tool called Winnow. The system calculates the weight and cost of each item that is thrown away and creates daily reports that pinpoint opportunities to reduce wastage. Cayron projects the hotel will save about US $80,000 thanks to Winnow this year.

“It’s brilliant,” said Cayron, who has assumed the responsibility of explaining the program to other AccorHotels-managed hotels in Asia. “It tells us everything we need to know, and it’s so intuitive. Training staff how to use it couldn’t be easier.”

So that guests are in synch with the hotel’s eco ambitions, Cayron also makes a point to regularly engage with lunch goers at all-day dining venue Voila!. After lunch, the Alain Ducasse disciple typically spends about an hour tending to his new, office-side garden. Despite the fact he’s got just 12 square meters to work with, he is growing everything from Thai eggplant to long pepper and lemon balm out there.  Cayron expects the garden to produce as much as 150 kilos of herbs and vegetables annually, and to be the hotel’s main source of honey once a hive is installed next month.

Development of the plot began in May as part of AccorHotels’ mission to have 1,000 ‘urban gardens’ internationally by the end of 2016. The push falls under AccorHotels’ Planet 21 initiative, which was launched in 2011 with the goal of putting sustainable hospitality at the core of the group’s growth strategy.

Products from the garden go into dishes that are served up in both Voila! and the hotel’s acclaimed rooftop restaurant, L’Appart. Items with Sofitel garden ingredients are marked on the menus. The tactic has raised discourse between server and patron. “Guests always ask about the garden,” said Lionel Formento, the hotel’s food and beverage director. “They want to know where it is, why we created one, what it’s got — the whole story.”