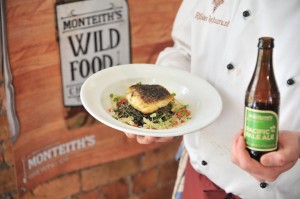 What do water buffalo, pig’s cheeks and hare’s legs have in common? They’re all key ingredients in the dishes that have made the cut in the Monteith’s Wild Food Challenge.

After a month long feast, daring New Zealanders have voted for their favourite wild dish and together with a panel of judges, have selected 12 finalists in the Monteith’s Wild Food challenge.  Expert judges have travelled the length of New Zealand, tried 122 dishes and pushed their palates to new levels in the hunt for the finest feast and the best flavourable Monteith’s companion.

“I’ve seen many innovations since the inception of the Challenge 17 years ago and am always surprised and delighted by the combinations of Monteith’s and wild foods created by talented New Zealand chefs,” says Head Judge Kerry Tyack.

“This year, yet again, they’ve outdone themselves with incredibly creative and well-crafted matches being served up throughout the country.  There are 12 finalists announced today but there could quite easily have been many more. There were a high number of very close results which demonstrates a real mastery of the Challenge concept.”

This year’s entrant dishes have featured a wide variety of wild ingredients from the ever-popular venison to alpaca, Canadian goose, ostrich and water buffalo.

“It really has been an exciting Challenge to date, one that has shown that beer, cider and food matching has evolved into a true art form, and that’s very exciting for all involved,” says Tyack.

Monteith’s also award those outlets who get immersed completely in the Challenge.  It’s not just the dish but the transformation of the outlets and the spirit of the wild that counts towards the Spirit accolades.  Six outlets have been victorious and taken home $2000 each.

The twelve top competitors will be serving up their dishes for the last time to a panel of professional judges to secure the grand prize of $15,000, and the coveted title of 2014’s Monteith’s Wild Food Challenge.  The winner will be announced on Tuesday September 9th 2014.

Saloon Bar & Grill, Pukekohe
Deer to Indulge: Wild Venison and Chanterelle Mushroom Pie
Locally sourced venison braised in Monteith’s Black Beer and chanterelle mushrooms, with a light puff pastry lid and served on a bed of franklin kumara and garlic mash. This dish is paired with a Monteith’s Bohemian Pilsner to cut through the richness of the venison and to complement the unique blend of spices.

Angus Road Eatery, Mystery Creek
Revenge of Watership Downs:
Hare fillet stuffed rabbit saddle with pork cheek bacon carrot puree. This dish is matched with a Monteith’s Brewer’s Series Barrel Aged Porter, which match nicely with the salty flavours of the bacon and the richness of the rabbit.

Peppers Beachfront Bar and Café, Gisborne
Meats the Douglas Score:
Seared venison with mushroom and goat’s cheese ravioli, wild watercress and shaved manchego beetroot jus. This dish is paired with a Monteith’s Doppelbock Winter Ale.  The perfume aroma of the goat’s cheese and the rich gamey venison in the dish work well with the distinctive malt taste of the Dobbelbock.

Riwaka Hotel, Motueka
Hare Of The Dog:
Smoked and beer poached leg of hare en croute with pan fried loin of hare, served with blue cheese and beer polenta, walnut and herb crusted rack with a cherry sauce. This dish is served with a Monteith’s Black Beer for its strong malt flavour that goes well with the strong flavour of the hare.

Blazing Copper Restaurant – Heartland Hotel, Gore
When The Hare Meets The Beer:
Pan fried hare, orange kumara mash infused with an olive and sun dried tomato tapenade wrapped in pancetta, field mushroom and served with a Monteith’s Golden sauce. This dish is paired with Monteith’s Golden Lager which complements the sweet and slaty flavour of the dish and refreshes the palate.

The Thomas Green Public House & Dining Room, Gore
The Hunters Packed Lunch Is Better Than Yours:
Pigs cheek cassoulet, Bluff oyster pie, watercress and apple salad, crusty bread and rosemary and cracked black pepper whipped butter. This dish is paired with the Monteith’s Crushed Apple Cider as it accentuates the sweetness of the apple and the earthiness of the oysters.

The Riverhead, Riverhead
The Fasting Buffalo:
Pan-roasted water buffalo seasoned with Karengo sea salt, and once roasted it is basted in a black garlic and beer lacquer. Served with native edible daisy dim sum, parsnip crème infused with gorse flowers, baby beets and Karu Parera potato crisps. This dish is paired with a Monteith’s Doppelbock Winter Ale which complements the flavours in the dish beautifully.